Jackson is a Jack Russell Terrier in the care of Freshfields Animal Rescue in Liverpool. His owner had passed away and the poor boy was distraught and very nervous of everything. He couldn’t cope with kennels and they found him a room of his own. Since then, he’s calmed down a lot but he’s still a very sensitive dog who needs just one owner, no other pets or visiting children and he needs his human to be with him most of the time. 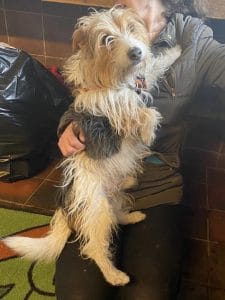 Once Jackson bonds with you he’s the most doting, affectionate lad you could wish for. He’s attached himself to one particular member of staff at the rescue and will fall asleep on their lap. He can be offish with other staff, even now he’s settled in. He’s very much a one person dog. Prospective adopters will need to visit several times to build up a bond with him so your distance from the rescue will need to be considered. Like all JRT’s, Jackson is a big personality in a little body. There are certain things he cannot abide. Being brushed is one. He’s clearly not used to being handled. He needs to be treated with kindness and understanding. Any undesirable traits come from fear. Clipping a lead onto his harness can be unnerving for all concerned as sometimes, this triggers him and he has bitten in this situation. Definitely a need for an experienced adopter for little Jackson! 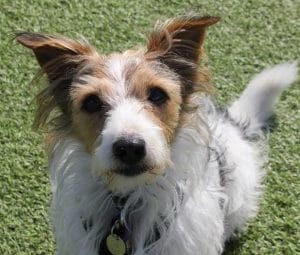 But it’s not all nitty grit with him! He has a fun side too. He loves walks and he loves playing with soft or squeaky toys. He doesn’t like other dogs so will need to be walked in quiet areas. The more fun his life is, the more relaxed and happy he’ll be in general. 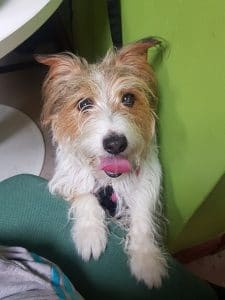 As long as he has his human by his side, he can face the world with confidence. He doesn’t like being shut in on his own and will cry and bark. He’s not destructive though and he’s impeccably clean. He just needs the right person to give him a chance at a happy retirement. Please say you saw Jackson on the Oldies Club website. 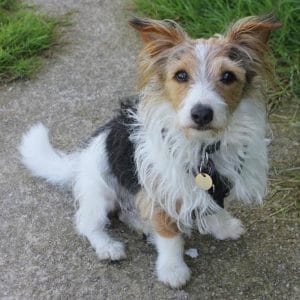 Tags: Active Oldie, Needs someone around most of the time, North West, Small and Cute, Terrier