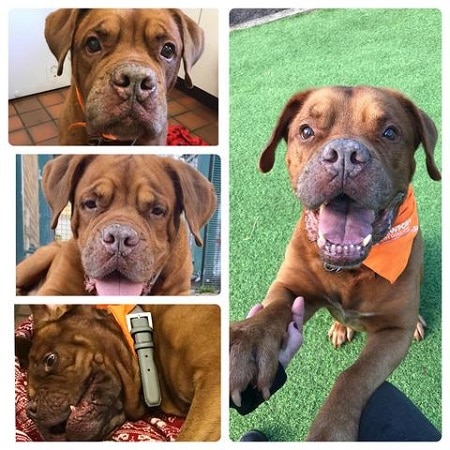 Handsome, hunky Hooch is a 9 year old Dogue de Bordeaux who came into the Oldies Club rescue as a stray when his owner could no longer care for him. Hooch is in a foster home in Hampton Hill, Middlesex, waiting for someone to offer him a permanent, loving home. 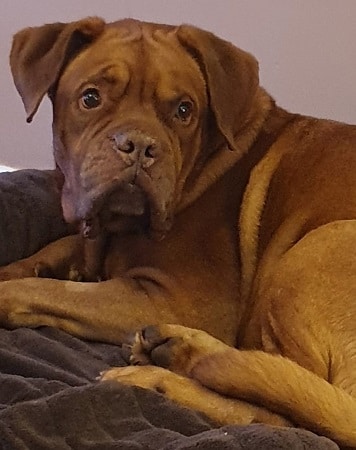 Settling in: It took a few weeks for Hooch to get into a settled routine.

Okay to be left alone: Hooch is happy to be left alone for a few hours, but he would not like to live with full-time workers with a walk/garden break at lunchtime. He is okay up to 4 hours but can become stressed if alone too long. 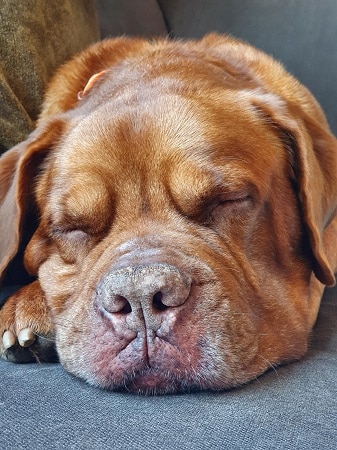 Living with dogs and cats: Although it’s believed Hooch had lived with another dog previously, he is reactive and protective of his owner and territory, so he would prefer to be the only pet in the home. Hooch chases small furry and feathered things! 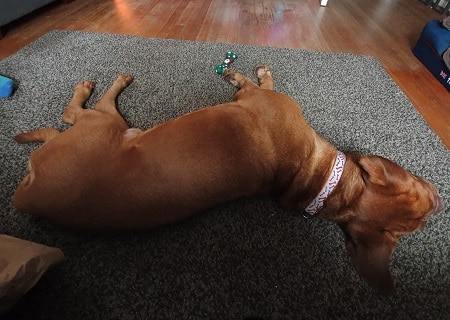 Out and about: Hooch now walks well on the lead and rarely pulls unless he sees another dog. He has no recall at the moment, but this is being worked on with help from a behaviourist. Currently, he is walked once a day for between 40 – 60 minutes.

Good in the car: Yes, Hooch travels well in the car. 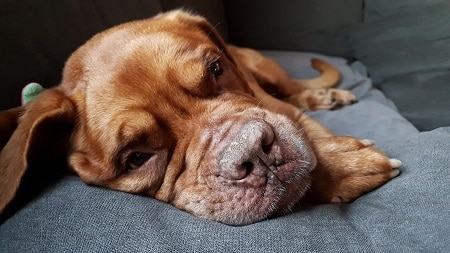 Hooch’s favourite things: He loves playing with his squeaky toys and human company. He’s an affectionate lad and thoroughly enjoys his tummy rubs. He also likes his walks and sniffing/exploring.

Hooch’s dislikes: He does not like other dogs approaching, especially off-lead. Hooch has reacted to the sound of roller blades on the pavement. 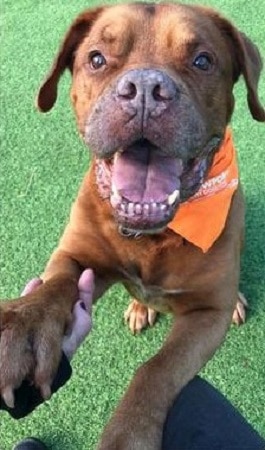 Hooch’s ideal home: Hooch needs a calm, loving home with people who have plenty of time for him. He would love a big garden to patrol and would suit a quieter, semi-rural location. He is currently being walked on-lead and he’s happy exercising this way. He plays with balls in the garden and likes a tug-of-war game.

Health notes: Hooch has been neutered whilst in foster care and he is chipped. He has a few lumps and bumps, but the vet has checked these and said they are harmless cysts. 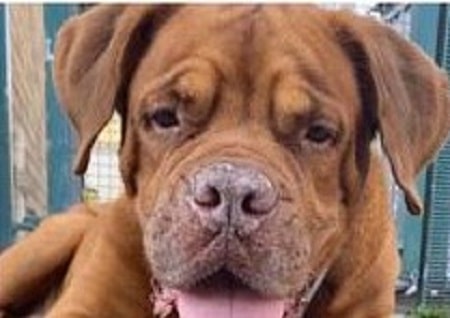 More from Hooch’s carer: “He is beautiful inside and out. Hooch is small for a male Bordeaux, just 42kg. He’s strong and can be determined if he wants to do something or indeed not do something. Saying this, his bond has grown with us and he usually wants to please and be with us. He’s an absolute delight to take care of and wonderful company. Also. he’s a great guard dog.”
_ _ _ _ _ _ _ _ _

If you would like to offer handsome Hooch a permanent home, please read our Adoption Procedures for information about the adoption process. You can then contact an Oldies Club rehoming co-ordinator as follows:

Hooch can be rehomed anywhere on the U.K. mainland – the closer to his foster home the better though, subject to a satisfactory home visit. Note that you will be required to travel to the foster home to collect him.

Tags: Active Oldie, Calmer and Quieter, Good with kids, Large and Lovely, Needs someone around most of the time, South East
Oldies Club Dog