31 July 2011: Ruby has very sadly been put to sleep. She had a massive fit a few days ago, followed by another, from which she didn’t recover :( Everyone at Oldies Club is very upset at such sad news. Thank you to Ruby’s wonderful foster family for taking such great care of her. Our thoughts are with you at this sad time.

Ruby is a very pretty 13 year old Collie X lady who came into Oldies Club care after sadly finding herself in a stray pound where she would have been put to sleep. She was rescued by an associate of the Oldies Club and moved to an Oldies Club foster home.

After arriving in foster care, it became apparent that Ruby had some health problems. She was quite ill when she first arrived, was very quiet and lethargic and didn’t want to eat. She was treated for a bad throat infection, which helped her to start eating again.

Sadly however Ruby had an episode which the vet thought was probably a stroke and while she recovered well and improved each day, she sometimes suffers from “absent” moments. In addition, the vet discovered Ruby had underlying heart condition, so started her on medication for this. In view of these health concerns, Oldies Club decided to make Ruby a sponsor dog and found her a permanent foster home, with the charity covering her veterinary bills for the rest of her life. Ruby did tolerate the other dogs in her original foster home, but she was not overly keen on having her rest disturbed, so Oldies Club advertised for a foster home where she could have all the attention. She is an easy girl to have around and is fine when left – she just settles in her bed and has a sleep. 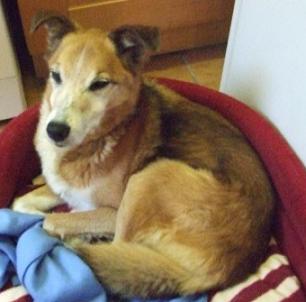 Ruby’s foster family says she does enjoy a fair amount of sleeping, but also likes to have a mad moment with a tennis ball. She is good in the car – she has a look around for a while and then settles for a nap. This lovely girl does seem to love her sleep and who can blame her :) Ruby enjoys her walks and is very good on the lead and happy to walk for quite a distance. Her recall wasn’t brilliant when she first arrived in Oldies Club care, but she likes to be close to her people anyway. Ruby is a lovely dog who is very loyal and affectionate, loves human company and still enjoys life :) She is a calm, quiet girl who takes everything in her stride and doesn’t really seem to be afraid of anything. She had a disruptive few months but has now found a permanent home where she has settled and will be taken care of, for the rest of her life. Oldies Club is very grateful to both foster homes for looking after Ruby. Did we mention Ruby liked to sleep?! :) 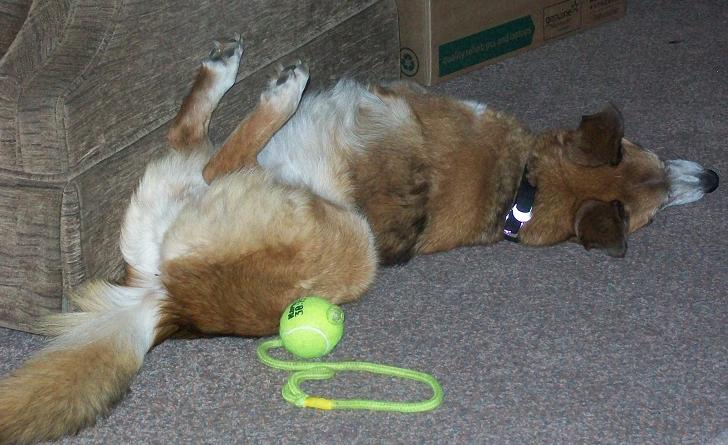 If you would love to offer a home to an oldie but your circumstances aren’t suitable, perhaps you would be kind enough to sponsor Ruby or one of the other special oldies we are caring for on a permanent foster basis.

Tags: sponsor, sponsor dog
In Loving Memory: Sadly, this animal has now passed away.
Log in