26 September 2014 ~ We are very sorry to have to update this page with the news that dear Baxter has sadly passed away :-( He had recently been diagnosed with lymphoma and was also suffering from dementia. Baxter was quite the character and will be very much missed. Our thoughts are with the foster families who took such wonderful care of him for us during his time with Oldies Club. Sleep tight Baxter.

Update: Baxter climbed Mount Snowdon on 30 November 2012, to raise funds for Oldies Club. He reached his amazing target, but you can still make a donation to sponsor his climb, via his fundraising page here. Don’t worry, he took his foster Mum and Dad with him to make sure he stayed safe. Well done Baxter, we think you are amazing! 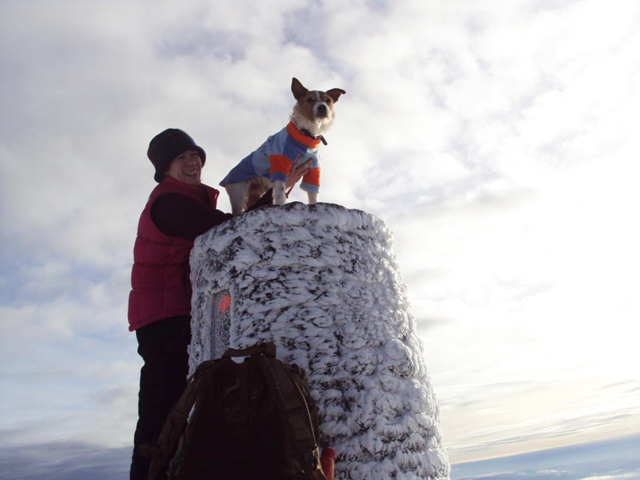 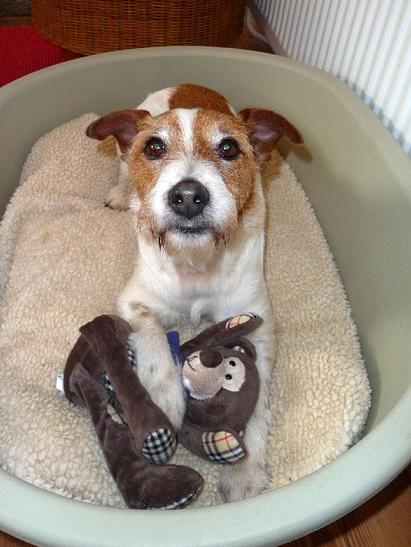 Baxter is a 10 year old Parson Russell Terrier who came into Oldies Club care because his owner no longer had time to look after him. Baxter needed an experienced, quiet home with someone who able to give him time to settle in.

Baxter settled well in his first foster home and was very affectionate, respectful and gentle. He then had to move foster homes and didn’t cope well, becoming stressed and barking a lot, especially at kitchen appliances that beeped. He needed a home where his new carers were prepared for some noisy or frantic behaviour and were able to give him plenty of time and patience.

Little Baxter is generally lovely, very playful and affectionate and loves cuddles. However due to his extreme anxiety in certain situations and worry about how a move to a new home would  unsettle him further, Oldies Club decided it was in his best interest not to move him. We have therefore placed Baxter in our sponsor scheme, which means he is able to stay in his wonderful foster home, with the charity covering his vet bills for the rest of his life.

Baxter is now settled in a new foster home where his carers handle him very well and calmly and manage his odd quirks by moving him into a different area or using ways to distract him from things that might make him anxious. He rewards his fosterers by being a great little dog who sleeps through the night and greets them in the morning with a waggy tail! 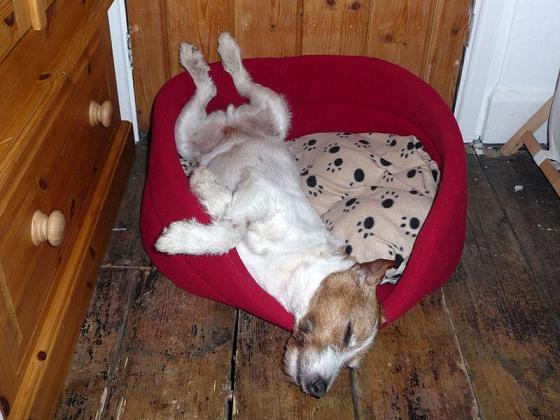 Baxter has been left on his own for short periods without any problems. He has a long walk beforehand and a little treat and a soft toy to occupy him. He is clean in the house and non-destructive. While Baxter is content doing his own thing, he loves human company and enjoys nothing more than to curl up with his foster Mum on the sofa, having his belly rubbed.

Baxter is a confident boy and has no qualms about showing other dogs who’s in charge. Off lead, he enjoys playing with others and mixes well in groups, especially with females. On lead, Baxter likes his personal space to be respected and can grumble at other dogs if he feels that they are getting more attention than he is, or if they stare at him for longer than he considers polite. Baxter walks well on the lead with other dogs and has enjoyed playing with a young female dog during a visit in his previous foster home. In his previous home, Baxter shared with two females, but he was quite bossy with them, so he is best living as an only dog.

There are no cats in Baxter’s foster home, but he does enjoy chasing them when he is outside, especially if they run across his path! 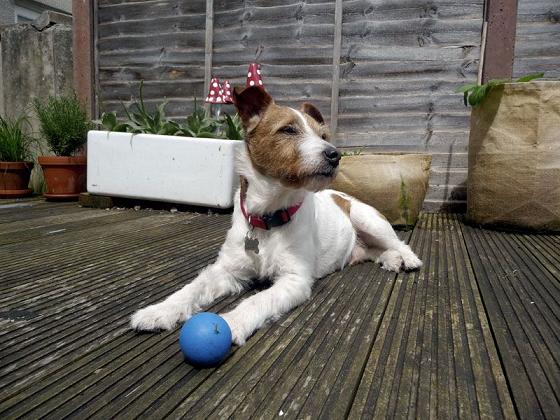 Baxter hasn’t met any children at his foster home, but when out on walks he is very friendly towards them, remains calm and doesn’t jump up. 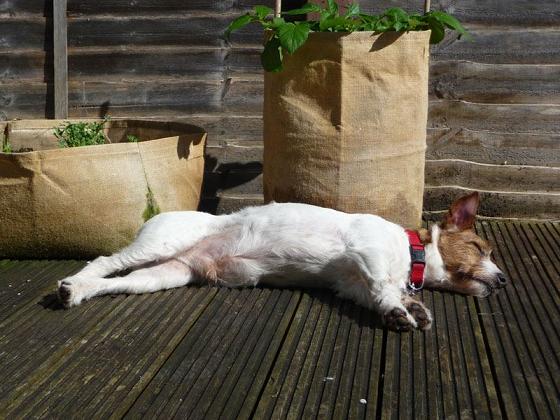 Baxter walks well on the lead with a harness, and he charms everyone he meets. Although he associates his harness with going out for a walk, he always shies away from it. His head drops and he looks very sorry for himself. All is quickly forgotten as soon as it’s on however, and he then happily trots to the front door, ready to go! He might try to walk ahead if he is particularly excited about where he’s going, but he soon settles.

Baxter has been taught to wait before crossing the road and is very patient when his foster carer stops for a chat while out on walks. Baxter is as happy walking through town as he is going to the park, or running in the fields. He gets two 1-hour walks a day, on lead and off lead. Baxter’s recall is good (especially if there are treats!) and he never wanders far without checking where you are. Although he may at times suffer from selective hearing, he never runs away, but does take his time coming back if there is something interesting to explore.

Baxter likes riding in the car – he travels in a crate in the car (with his teddy!).

Baxter has an endearing attitude towards his beloved toys and, unlike most terriers, doesn’t destroy them. It’s funny to watch him tossing them up in the air and then rolling onto them, back and forth, looking blissfully happy. He spends hours holding his favourite soft toy between his paws and suckling it like a pacifier until he falls asleep. Watch him in the short video below:

He also enjoys playing fetch with a squeaky ball and partaking in a good game of tug, only reluctantly letting go of his prize when asked to! Baxter relishes a good day out, but he is always happy to come back home where all his favourite things are. 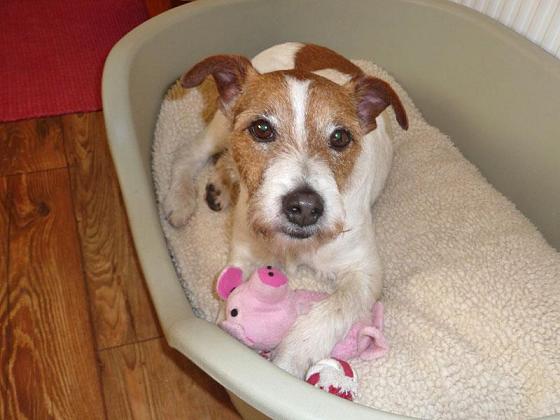 When the sun is out, Baxter likes to sunbathe in the garden and roll around on fresh grass. He then crawls on his front legs to rub his tummy on the grass! When the weather is too wet or cold, he enjoys sitting on the windowsill, watching the world go by and keeping track of what the neighbourhood cats are up to (no good, evidently!)

Food is another highlight of Baxter’s life, although he is not possessive of it. He never begs at the table, but will stare at the floor in the kitchen when meals are being prepared in the hope that something tasty will fall. Baxter sits and gives his paw for a treat, and will sit and stay while his food bowl is put down.

What makes Baxter happiest is people, even the postman will do! He enjoys sitting on laps and politely waits to be invited up. He also loves to curl up beside you on the sofa and will often place his paw across your lap, before contentedly falling asleep. 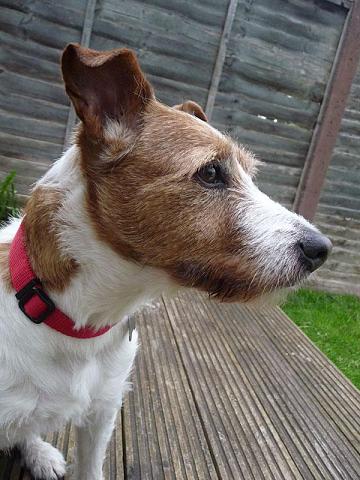 Baxter thrives on human company and is happiest in a home where he is the only dog so he can have his family all to himself, although he never pesters for attention. Baxter likes his family to take him on nice walks and play fun games with him. He also needs to have a quiet place to retire to when he simply wants to rest, along with a nice sunny garden. Most of all, he is glad to have found someone to love him as much as he loves them. 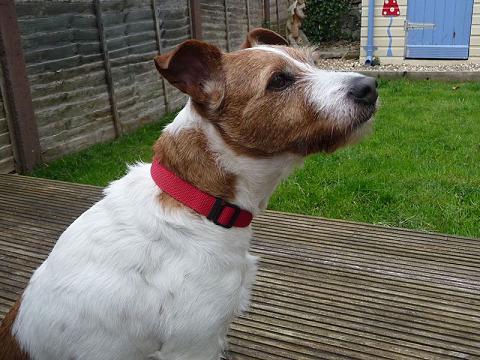 Baxter has has no physical health issues and is in excellent shape. His legs tend to shake when he is excited or following a long walk, but this has been checked by the vet and is nothing to worry about as it is quite common in terriers. His eyes are bright and his hearing is excellent. Baxter recently had his teeth cleaned and two molars removed, so he now has a sparkling smile to match his personality!

Baxter’s foster home described him as “Affectionate, entertaining, undemanding, endearing. Baxter is simply wonderful. He is both handsome and adorable, and we have never known a terrier to be so loving and easy to please. He has fit in really well, so much so that it feels like he has been with us forever. Baxter is an absolute joy to foster, always ready for a cuddle, but never demanding – he simply waits to be invited onto a lap or sofa and when he is, he just lights up! He is smart, funny and very, very sweet.” 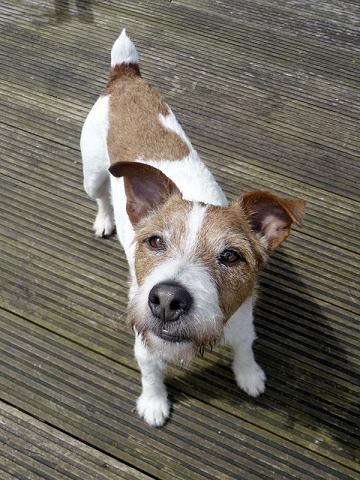 If you would like to help us care for little Baxter, or one of the other oldies in our sponsor dog scheme, please click here for more information.

Tags: sponsor dog
In Loving Memory: Sadly, this animal has now passed away.
Log in