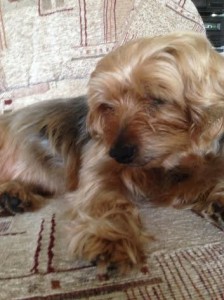 Dear little Fudge was re-homed in March this year, and his wonderful owners have sent us some photos and a brief story of his first days in his new home. Fudge figuring everything out!

“What a wonderful little dog Fudge is! He was so well behaved on the journey back to our house. We stopped at least five times and each time took Fudge on a mini walk which he really enjoyed. The only time he fretted a little was whenever one of us went inside the service stations to buy something, he didn’t want any one of us to leave him even though one of us stayed with him outside. Each time he got out of the car he used the opportunity to go to the toilet and when it was time to get back in the car he jumped back in as soon as we opened the car door. When we eventually got home around 9.30 pm and showed him to my uncle he was overjoyed and made a very big fuss over Fudge and then took him for a walk! Fudge has eaten quite a lot of his ‘Sainsburys’ food, quite a few biscuits and drank a lot of water. The biggest surprise of all was Molly who took to him very quickly, she has walked over to him several times and touched her nose to his and then rubbed up against him in the same way she does with us, we were very surprised! Fudge tolerates her attention easily and it would appear they are already friends. They have been pinching each others food but neither of them mind. We let him out and off his lead into our enclosed back garden and he thoroughly enjoyed it, running around and exploring everything with Molly, our three year old tabbycat, following him everywhere! When it was time for him to go to bed he jumped in with us and stayed there peacefully the entire night!
As I type this message Fudge has already had his morning walk and his breakfast and is now having a shower and loving every minute of it!” Fudge looking very comfy!
We are so delighted that this dear lad has found happiness in his later life, and we hope Fudge and his family have many happy years together.
Log in