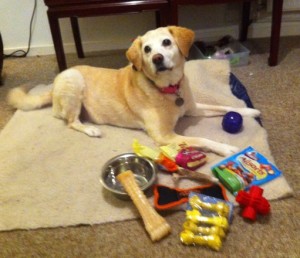 Wondrous Wilma is a 13 year old Labrador x Whippet who was rehomed via Oldies Club in November. She had a great first Xmas with her lovely new family, and as you can see in the pictures she has been spoilt rotten! Here is what her new owners tell us:

My husband and I are the lucky couple who adopted Wilma, and really, to say we rescued her is misleading as we think she has given us a new lease of life and done so much more for us than we could ever do for her.

Just thought I’d update you on our Christmas. Needless to say, she has been spoilt rotten! It started with all three of us opening our stockings in bed (the same once-forbidden territory bed which she has laid claim on from Week 2 with us). We started with Wilma and she seemed to know right away it was hers. She delved into it and started unwrapping the goodies herself. Tom and I were so amused, it was like watching a young child on Christmas morning.

We then did the rounds for the presents under the tree. Tom’s family tradition is to go up to it in turn and pick one out, though it cannot be yours. We took it in turns to go up with Wilma to ‘supervise’ her picking out something. By the end of the day, she had a sizeable stash of treats and toys for presents and learnt that anything being unwrapped was potentially interesting! Her toy destruction continues. She has made considerable tears and holes in a toy labelled ‘seriously strong’ (present from my mum) and had a good go at the squeaky Kong ball such that those are only for closely supervised play now! She also got other chew toys which are standing up well so far.

Tom’s family has been wonderful in accepting Wilma into the family. His parents sent her a present of rawhide chews when sending down the human presents, and his aunt and uncle, who live nearby, have extended their invite to include Wilma when inviting Tom and myself for their Boxing Day dinner. I’m more excited about Wilma’s invite than my own :D She’s going to get a good brush and put her Christmas ribbon round her collar before going out tonight.

Adopting Wilma was the best thing we have done. It’s hard to believe she’s had to wait a long while for a home offer as she is a pure joy and delight. Lucky for Tom and I, I guess!

Merry Christmas and a wonderful 2014 from us, especially woofs and licks from Wilma. 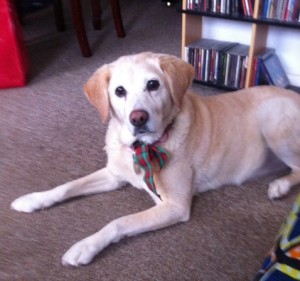 Happy new year to you too from everyone at Oldies Club, and thank you for this lovely update! Wilma has clearly found the family of her dreams :)