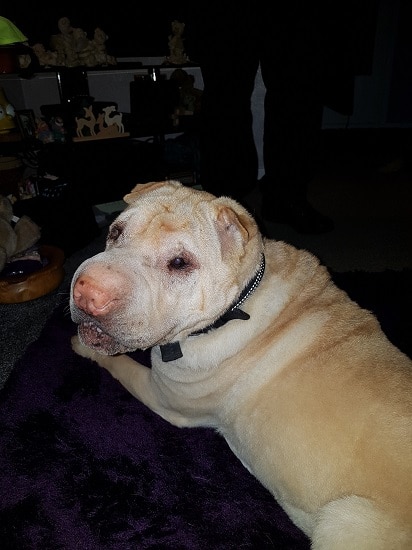 We have heard from Barney the Shar Pei‘s new owners and it certainly sounds like he’s landed on his paws!

This is the lovely update we have received:

“Barney continues to do well. He likes to settle on the back of the settee and be quite a guard dog, barking at things going past the window. Marion has to leave a gap in the vertical blinds so he can see out. He loves his walks and is let off the lead in a quiet area where he runs like a greyhound. He prefers the settee to his bed. He seems to know when his dad is on his way home and gets so excited he doesn’t know what to do with himself. Barney loves his piece of toast every day.

Barney is good company as I am on my own in the daytime. He is intelligent and understands much of what you are saying. He loves his walks and people think he is a puppy because he is energetic. He settled into the home from day one and spends half of his day sleeping in the hall and the other half of the day people watching out of the window. He is a big part of the family. 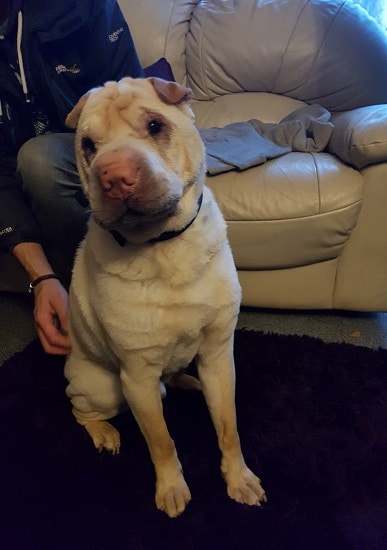 He had only started to play with toys a couple of days before homechecker came to visit us/him. We found eventually he liked the ball that dispenses food as he chased it after much trial and error with toys and balls. But only when he wants to play or show off his skills.

He sleeps a bit more now he is ten years old but that may as well be due to the awful weather we have presently – not so good for exploring the garden in rain! He loves his walks though, 2 X day, and likes to watch and bark at cars and motorbikes going past the bungalow even knows the sound of a neighbour’s car and barks to greet her car (lots)!! As well as my partner’s car and motorbike.

I would not be without Barney now as he understands so much – I only have to say let’s go feed the guinea pigs and he’s at the patio door before I can get there! I find if I just use few words regularly he soon understands what I mean. Even when I say would you like to sleep in YOUR bed Barney instead of ours – he prefers ours but this does seem to be a Shar Pei thing!!!

Only thing he does hate is being left alone and cries for a while when ‘dad’ goes to work but soon settles again with just me. We have foregone holidays/weekends away as would not want him to pine in kennels as we know he would hate that type of living.”

Isn’t Barney a lucky boy to have found such kind and considerate people? We are so happy for him!