~ In May 2019, amazing Oldies Club supporter Jacquie embarked on an amazing bicycle tour, accompanied by her beloved little dog, Murphy, to raise funds for Oldies Club. Please support them HERE.

Update 13 June 2019: ~ Jacquie and Murphy made it to North Cape, the northernmost point on the European mainland! Please support them via the above link – Jacquie’s cycling hundreds of kilometres with little Murphy on board, to raise funds for our beloved oldies. You can donate from £2 upwards – thank you :-)

If you read our initial post, below, or have been following Jacquie’s blog, you’ll have seen Jacquie wasn’t sure that they would be able to do the extra 100km or so to get to North Cape due to the weather conditions, but they did it! Well done, both of you

. They are now pointed in the general direction of Spain. 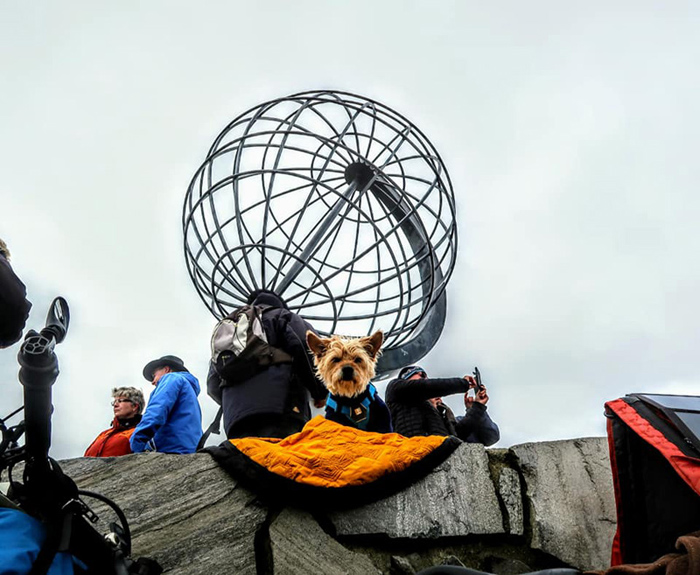 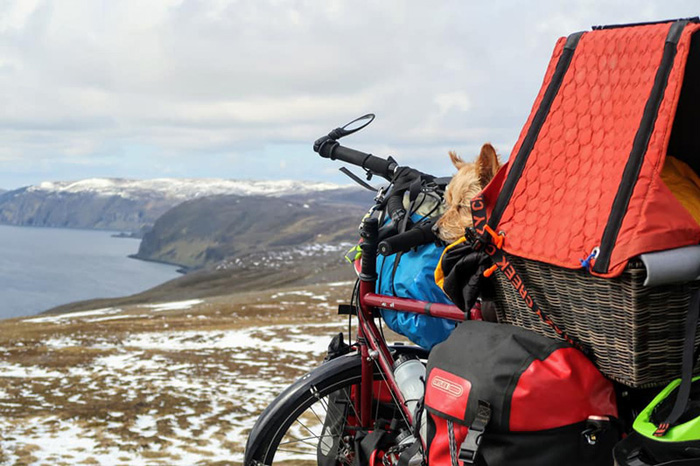 Murphy, enjoying the view, after his human has pedalled for hundreds of kilometres for Oldies Club!

They flew from Calgary, Canada, at the end of May (even deciding to cycle and camp their way, over a number of days, to the airport!), arriving in Amsterdam, Europe. After a few days rest, they  flew to Helsinki, then Ivalo, Finland, where they began to pedal north for 500kms! The plan was once they reached the most northerly road-accessible point in Europe, the North Cape, they would start heading down the west coast of Norway, eventually joining the Pilgrim’s Route (Eurovelo 3) to see how far south in Europe they can get, eventually returning to resettle in the UK.

Jacquie has already cycled 300km, as we publish this, reaching Norway. The weather has turned grimly against them, as they have been fighting their way on the final stretch to North Cape. Due to the dire weather forecast, they have taken a break in a heated camping hut around 120km from the top of Europe by road, as they hope for an improvement in the weather forecast or decide, because their safety must come first, to start heading south rather than trying for the last 100km to North Cape. (Edit, please see update 13 June, above!)

We think this is an absolutely amazing challenge to undertake to raise funds for Oldies Club and hopefully a mostly wonderful, rubbish weather aside, experience for Jacquie and Murphy. Jacquie has a fundraising page set up HERE and, bearing in mind what they are undertaking, we would love our supporters to donate what they can to help them get closer to their £500 total. You can donate from just £2 upwards :-). 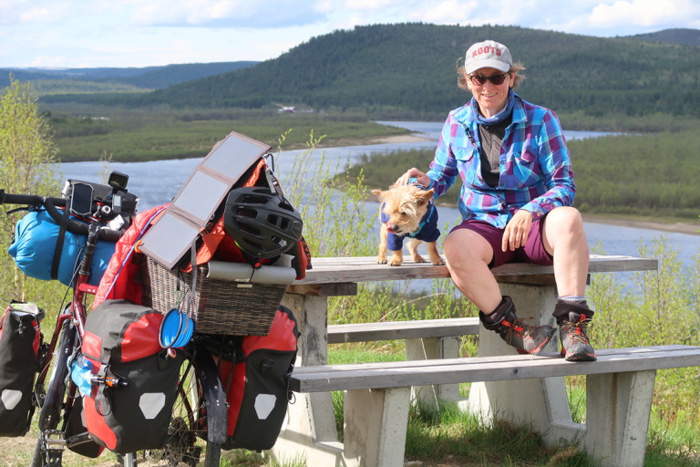 Here’s a lovely photo of Jacquie and Murphy, taken a few kilometres into Norway. Please visit Jacquie’s blog, which she is updating when she can, for lots more lovely photos and details of their adventure. We’re sure she’d really appreciate you taking a moment to leave a comment and show your support there too.

Jacquie and Murphy, thank you SO much for doing this for Oldies Club. We wish you the kindest possible weather for the rest of your road trip and much success in your fundraising. Our sugar-frosted ones thank you :-)