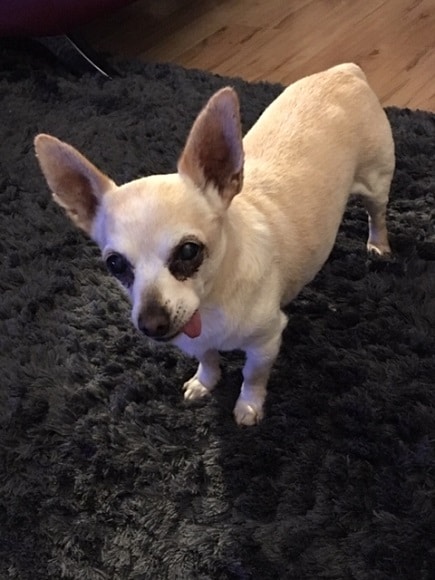 We are very sad to say that since Pepe’s adopter prepared this update for his rehoming story, Pepe has very sadly passed away, but his lovely adopter still wanted us to publish the text that she had prepared:

“When I first saw Pepe on the oldies site I liked him immediately, but because we had not long lost our previous adopted oldie after just a year, my family didn’t want me to take another oldie. I also got ‘but you don’t like small dogs’, but somehow Pepe was different and I was drawn to keep looking at his face.

I applied and, to cut a long story short, we collected him from his lovely foster carers — 10 hour journey there and back but we were fortified by delicious home baked cheese scones. Once home he quickly settled with my dog Suki and my two cats Mocha and Blue. Once he had reached his optimum weight his stick-out teeth, he only had 4, stuck out no longer and his body filled out so that his ribs no longer showed. He quickly became my limpet dog and wherever I was he would be; if I was busy he would go and curl up with Suki, either in her tummy, by her side, or bum to bum. Now, wherever Suki goes he follows, trotting, tail wagging, behind her. Everyone loves him, he is such a little character letting you know when he is hungry, when he wants to go out and is a real comic dance when he decides it is walk time. My two youngest granddaughters love to walk him on the beach and around the close, he trots happily alongside them.

Everyone who said I shouldn’t get another dog fall in love with him immediately they meet him.

He has his own step to get up onto the sofa with. He curls up or stretches out next to me and sleeps peacefully until I move; I don’t get very far without him catching me up. He also has a step to get into my bed with! I couldn’t leave him in the hall or the kitchen as he got very distressed, so my bed quickly became his domain!

Everyone who knows him or meets him says what a happy little dog he is. My only regret is not being able to get him to play, although when I come home having been out the greeting I get is hilarious, he bounces from side to side, all four legs leaving the floor to a chorus of barking that can be heard by those living down the street. He then tries to catch my hand and he tries to play by mouthing at it.

He brightens all my days and keeps me sane. I don’t regret a minute of the time he is with me and I hope we can keep him for a long while yet.” 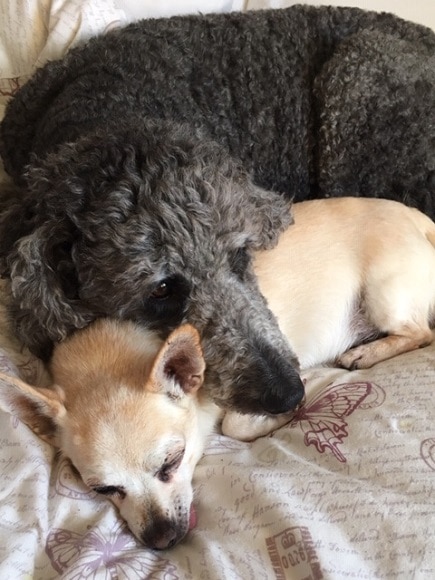 We are in tears reading this story, knowing that precious Pepe’s time in this very happy home was far, far too short. But it is heartening to know how much he was loved by his new mum and how much he loved her and Suki. Pepe was obviously meant to find this very special lady for the final chapter of his life.