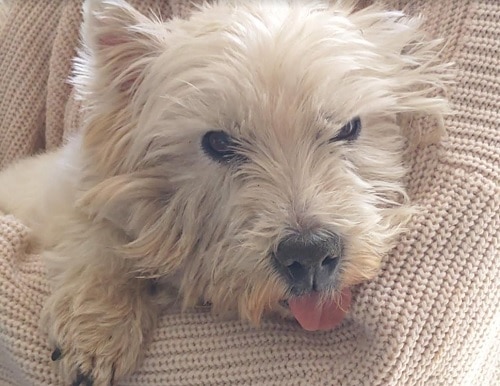 “By the time we were aware that Lily had become a member of Oldies Club, we were told that she had already found her new “des res”. Luckily for us, however, it didn’t quite work out and consequently we were invited to apply to adopt her. Imagine our delight when we received the phone call on New Year’s Day to say our application had been successful and Lily was “coming home” – what a way to start 2020!

She was initially a very quiet little lady, but she has definitely found her voice: singing when the phone rings; woofleing impatiently for her food and whining at the letterbox when the delivered mail is hanging tantalisingly just out of her reach. How she loves to take the post in her mouth and carry it all around the house, and all the better if someone is in hot pursuit attempting to retrieve it! Check out the photo of “Post Lady Lily” in the 2021 Oldies Club calendar.

Lily is “delightfully derpy” – an affectionate term coined from the fact that her lack of pearly whites means her tongue constantly sticks out. 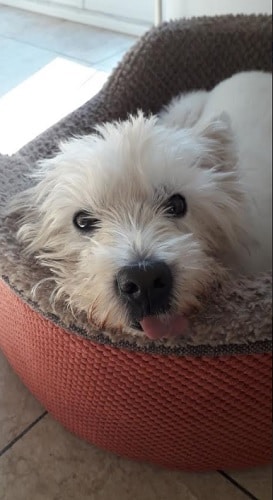 She also lurrrrves the love – no amount of ear scratching, back rubbing or tummy tickling is ever enough and if you dare to stop for a moment, her paw impatiently taps for more.

Lily’s other love is her otter – who we have imaginatively called “Ottie”. Ottie came with Lily along with another soft toy and although she has also gained 2 or 3 others during her time with us, Ottie remains her firm favourite – where Lily is, Ottie has to be. Whichever room we have settled in, Lily will join us too. However, after a couple of minutes, up she will get and off she will go, shortly returning holding Ottie carefully in her mouth. (Shhhh, don’t tell Lily, but Ottie does occasionally get whipped away for a refreshing spa day and “bubble bath” and has to be carefully hidden from view whilst sunbathing to dry off!). 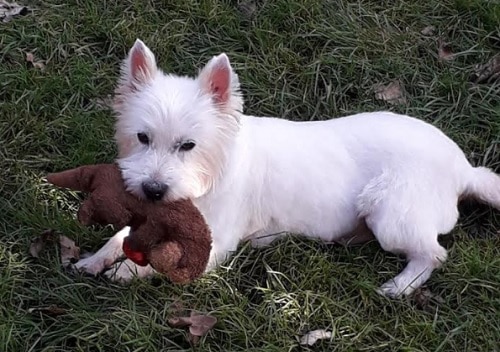 September was an exciting month when we ventured onto the canals for a weeks holiday and Lily had her birthday and turned 13 – she rocked both her little life jacket and her birthday hat. Also, much to our amusement, Lily has found her self a toy boy called Buddy. Not deterred by the fact he is at least 11 years her junior and 5 times her size, she whines mournfully whenever we bump into him on our walks and leaps around like a puppy trying to get him to play – maybe those tablets for ageing joints aren’t required after all! Unfortunately – or is it fortunately – the feelings aren’t reciprocated, or is Buddy just blind to true love?

2020 will be remembered for many things, but we will remember it for the year when Lily (and Ottie of course) “came home”. We count our blessings everyday and it’s not hard to figure out who is top of the list!” 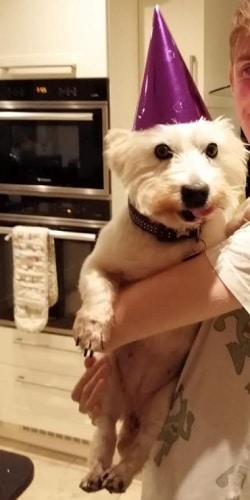 Isn’t that a wonderful update to read? We all need to be uplifted at the moment and this is certainly an uplifting story. Well done little Lily!