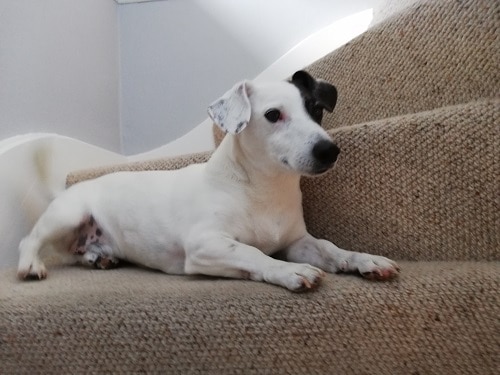 “Just before Christmas, we had a special message from Oldies asking us if we could foster an eleven year old JRT called Alfie.

This was our first ever foster dog. After a phone call with Oldies outlining the support we would receive from them, including our very own go to support person called Miranda, we decided to jump straight in and say yes!

Lo and behold, Alfie arrived by Oldies transport one Sunday afternoon soon after Christmas. We weren’t sure what to expect but Alfie jumped happily down from the van, trotted up our path, into the house and jumped up on our settee, tail wagging frantically. We decided that the best way of getting acquainted might be to watch a Sunday afternoon film together and so it was. We were definitely smitten from that moment on. 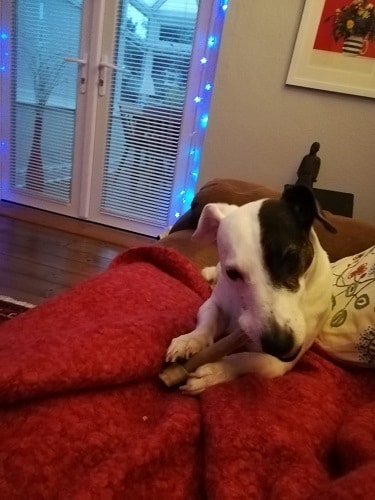 In those first few days it immediately became obvious that Alfie was a friendly, intelligent, biddable little dog. However, we knew that he had lived with his previous owners all his life and therefore it was very understandable that he was anxious not to let us out of his sight. He became distressed to be left at night and needed to sleep in a crate next door to us and he still follows me around the house wherever I go. However he does like sunning himself in the garden or in the conservatory and he can be found there braving it on his own sometimes. We do need to put in work still on leaving him alone for short periods as currently one of us needs to stay with him at all times.

We were aware before he arrived that he was reactive to other dogs. After struggling with this, I consulted Oldies and they offered us the help of a dog behaviourist. This has been very successful and passers by have started to compliment him on his good behaviour…. and the odd dog treat doesn’t come amiss! 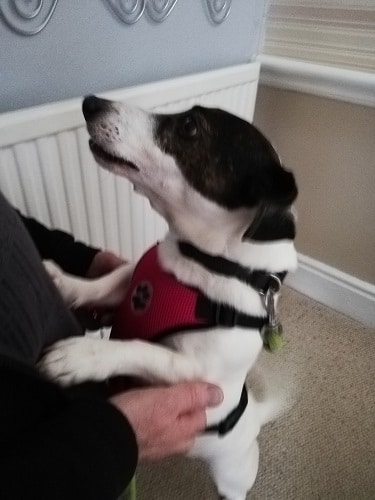 We have discovered some interesting things about Alfie along the way. For instance, he seems to have been used to tea and toast in the morning. One day he was found drinking from my mug and he makes every effort to persuade us to part with a bite of toast. (He prefers marmalade on his)

He also surprised us one morning by hopping up the stairs to the bedroom carrying the post. Now, if our postman calls by with a parcel he saves a circular to give to Alfie.

So…. Oldies supported us along our path, Miranda was always on hand with advice and support, vets and behaviourist were covered by Oldies, but now it became time to put Alfie up for adoption.

There was never any question about it. We both wanted to be the ones to adopt him. He has enriched our lives and we love him dearly. Thank you so much Oldies for supporting us through this journey together. You have been wonderful.” 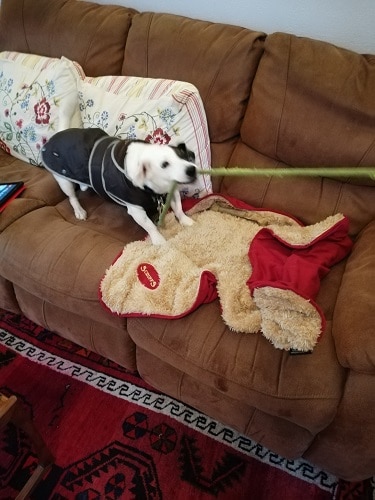 What a beautifully-told story, and it’s so great to hear that your fostering and subsequent adoption experience was so positive. We are especially pleased to hear that little Alfie is learning to be a good boy around other dogs. Well done Alfie!