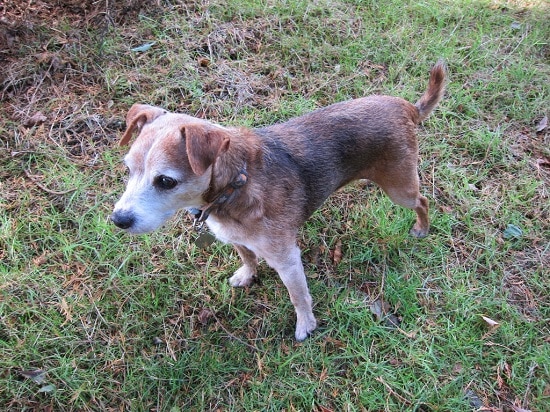 We had this lovely update on Kai, now named Cai, which is Welsh for David.

“Cai has settled in well – after an initial period during which he tended to attack other dogs, and had to be kept on the lead! Fortunately, he can now be distracted with a treat, so we let him run free when we take him for his twice-daily walks – through the forest every morning, and into the meadow behind our house every evening for a work-out with his ball.

For a dog of his age – the vet couldn’t believe he was 14 – he’s amazingly active, loves his food*, and sleeps soundly on his cushion by day or in his basket by our bed at night.

He’s Sally’s dog really – won’t let her out of his sight, and if she leaves him behind for any reason, refuses to be comforted.

*Including the low-hanging runner beans in our vegetable plot. We couldn’t understand why they kept disappearing, until we caught him in the act!”

We’re very pleased to hear that Cai is being a good boy and enjoying interesting walks. It’s also good to know that he’s happy to help himself to his 5 a day!