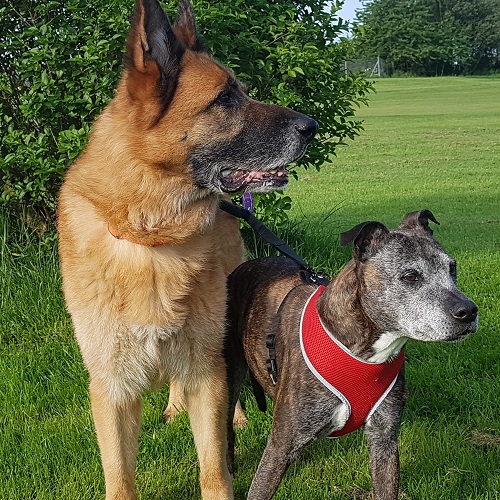 Toby and Josie, the very best of friends, found a fabulous home together after a few urgent appeals for a suitable home for them. Toby has sadly now passed away, but we are so pleased to have received this story from their lovely adopters:

“We lost our much loved 13 year old German shepherd Eddie and were really devastated. We had always said that when Eddie went, we would get an older dog after a holiday back to Florida, so we quickly got booked for Florida to go in the February. These few months were the first time in 30 years together that we had no animal in the house. By the time we returned from the fantastic holiday we knew we were ready to welcome a new dog. Within a few weeks we saw a Facebook share of 2 dogs urgently needing a new foster or permanent home: Toby the German shepherd was over 10 and had always been with his “mummy” Josie who was a year older and a staffy whippet cross. We understand their original owner (Mummy 1 as we refer to her) had been unable to care for them any longer hence them needing new homes. We had room for 2 dogs so we contacted Oldies Club with our application and held our breath! Luckily the application was speedily approved and by mid March our new dogs were with us. 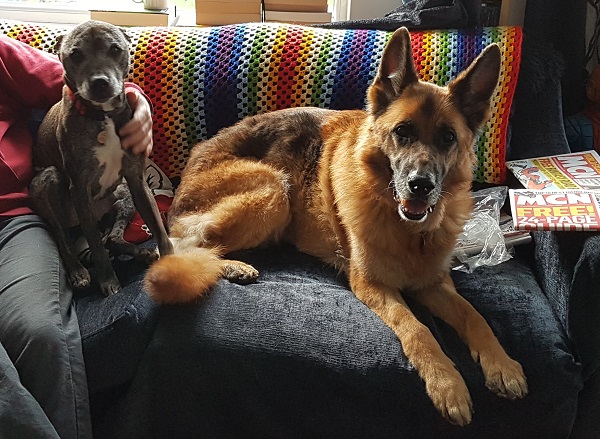 They quickly spotted their new beds (which we used to call our sofas) and had us wrapped round their pinkies from that moment. Having come originally from the south of England via a few months in foster in Preston, we had a few language barriers to overcome initially as they simply could not understand the way we pronounced their names in our Scottish accents. Their wee faces looked completely blank or puzzled a lot for the first few weeks until we all adapted to each other lol. Tobes was not an easy dog in some ways, as he had a seemingly inexhaustible supply of energy for an old boy and as he gradually developed some form of dementia, he couldn’t remember he had just been out to play, so poor Grant was often called upon for playing duties again (and again) just after he had sat down. Toby also wasn’t fond of the darker nights once winter came round as his slightly failing eyesight meant he got a bit fearful, however he was well loved by us and we had him for almost exactly a full year before we very sadly said goodbye to him.

We worried Joaster-toaster would really miss him as they were inseparable, however she has coped really well with being Top Dog and she happily celebrated her 2 year Gotcha Day anniversary with us a few weeks ago. She has her own frailties now but is happily spending her days snoring on the couch, going for shorter walks on her terms, eating us out of house and home regarding Baby-bels and the odd cream cracker which she crunches through with obvious delight and having her zoomies in the garden when she feels like it. 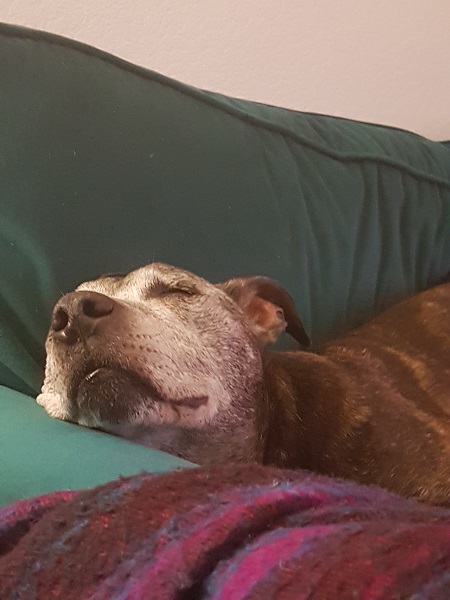 We are so glad we came along looking for a new pet at just the right time they needed a home as it would have been so sad if they had had to be parted after so long together and we loved having them as a duo and now as a single.” 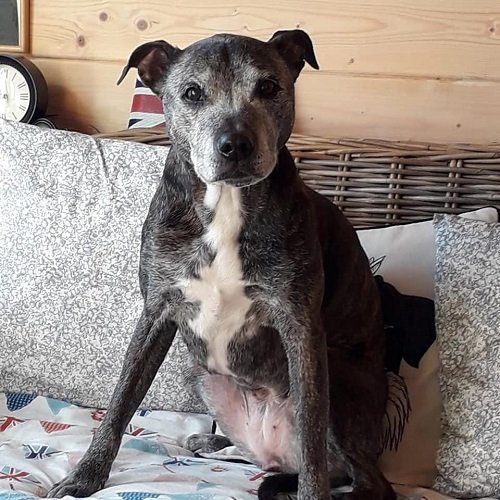 Here at Oldies Club we are so pleased that Toby and Josie found the perfect new home together. Toby is obviously very much missed, but it is good to see that Josie has adapted well to life without her big buddy and is continuing to be spoiled rotten, as all old dogs should be!