Bailey is a lovely 11-year-old Lhasa Apso whose owner was no longer able to look after him. Bailey is in an Oldies Club foster home in Hindhead, Surrey, waiting for someone to offer him a permanent home.

Settled quickly: Bailey only took a couple of days to seem settled and comfortable at his foster home. He was happy to explore, and slept well from the beginning. There were just a few issues with food and getting his stomach settled, and getting the quantity and timing of his meals right for the first few days.

Can be left for a few hours: Bailey likes to have company and gets a little stressed when the person he’s most attached to goes out, but his foster carers have left him for up to four hours and he has been OK. He wouldn’t suit a home with people who go out to work full time though.

OK with some dogs: We were told that Bailey is nervous of bigger dogs because of an incident when he was young. On walks he generally seems curious and excited to meet other dogs on leads. Most encounters have gone well, just some occasional growling, barking or hackles raised if he meets a dog he isn’t comfortable with. He hasn’t yet met off-lead dogs in his foster home or out and about, so we don’t know how he is in that situation. We will be looking for a home where he is the only dog.

Would chase cats: His previous owner said that Bailey doesn’t get on well with cats. He’s seen a couple in the distance since he’s been in foster care, and he would like to chase them, but has always been on the lead.

Fine with older, visiting children: Bailey was used to having grandchildren visit his home and he would be happy with that again. He is fine with kind and gentle handling.

Enjoys slow, shortish walks: Bailey is OK on the lead but likes to stop a lot to sniff and is very determined to go at his own pace. He is currently having three walks each day of between 15 and 30 minutes. On longer walks he does flag and will lie down and have a rest before being prepared to continue. He wasn’t let off the lead by his previous owner, and hasn’t been in foster care. He enjoys pottering around the garden. His foster carers have tested his recall in the garden and it seems poor. He sometimes responds when called or whistled, but not always.

Loves a car journey: Bailey loves the car but does get very excited, so in spite of being secured via a car harness, he tries to stand up at the window on his back legs and isn’t keen to sit when asked.

Bailey’s favourite pastimes: His foster carer told us: “He sleeps a lot but when he’s up and about he enjoys exploring the garden. We put kibble into a slow-release ball that he pushes around and he likes this way of getting treats. He’s intelligent and tackles the challenge of getting the ball out of tight corners etc. Sometimes he gets very excited and wants to play – eg. he grabbed a cardboard tube from the recycling today and found it very exciting to chew, roll around on and guard. He does a kind of play-nipping at our feet/legs, barks and runs round chasing his tail. It’s probably a game he’s played before, but we haven’t worked out exactly how to join in yet!” 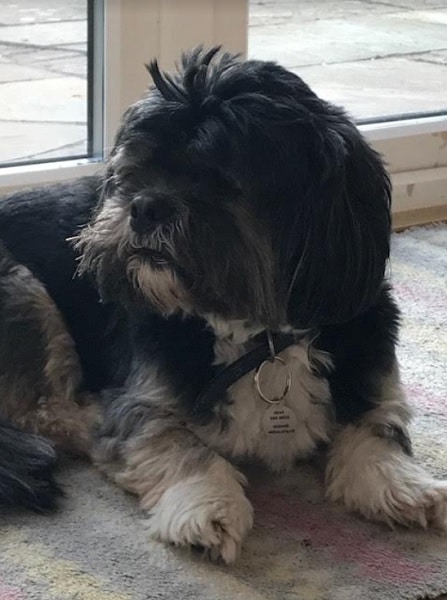 Bailey’s dislikes: Nothing major, except that he isn’t very keen on having his harness put on.

Bailey’s ideal home: One where there is usually someone around for company, ideally with an enclosed garden so that he can roam about (or he would need to learn recall if ever to run free elsewhere). He wouldn’t suit a family looking for a dog to go on long walks.

Health notes: Bailey is neutered, vaccinated, microchipped, wormed and flea treated. The only health issues we’re aware of are occasional stiffness in his front left leg (the vet thinks it is slight arthritis), and a tendency to regurgitate his food quite dramatically if he eats a bit too much too quickly. Three smaller meals a day, and using the treat ball for slow-release extra kibble, has helped.

More from his foster carer: “Bailey is affectionate, good-natured, sleep-loving and intelligent. He’s good company, can be quiet and peaceful but also fun and entertaining – we especially enjoy the ways he rearranges his bed for maximum comfort, carefully positioning his cushion as a pillow, and quietly snores while he sleeps!”

——————————
If you would like to offer Bailey a permanent home, please read our Adoption Procedures for information about the adoption process. You can then contact an Oldies Club rehoming co-ordinator as follows:

Bailey can be rehomed anywhere on the UK mainland – the closer to his foster home the better though, subject to a satisfactory home visit. Note that you will be required to travel to the foster home to collect him.

Tags: Calmer and Quieter, Small and Cute, South East
Rehomed This dog has found a new home and is no longer looking.
Log in