Buster is a 10-year-old Labrador Cross who is with Dogs Trust Merseyside.

Buster is the proud owner of the wiggliest bum at the centre! He is a glorious boy whose behind goes into overdrive when he sees his favourite people approaching. He will usually run and get his blanket, and he stands with it in his mouth like a puppy. He’s still very active and loves to be outside, and is used to having a few walks a day. He loves his toys and likes to play with his carers, but only drops what he’s got if you have another one to trade! 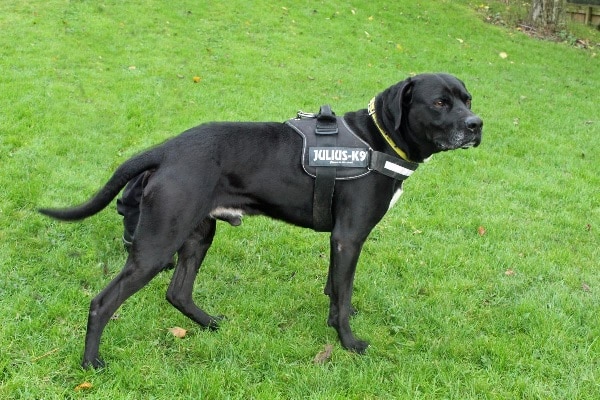 Buster doesn’t know what to do with other dogs and seems more comfortable with the girls than with the other chaps. He can be possessive over toys at times so is probably best as the only dog at home anyway. Buster was initially easily excited when he first arrived and was grabbing tree branches on his walks, but he’s settled in beautifully now, and no longer does this. Dogs Trust wouldn’t advise any game of that nature to be encouraged once he’s home, as his excitement could escalate quickly.

Buster is housetrained and he can live with children aged around 13 plus. He is not a fan of squirrels!

Could you offer Buster an active home?

Please mention that you saw Buster on the Oldies Club website.
———————