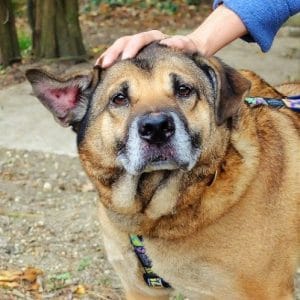 Poor old Buskybear is a super affectionate Crossbreed boy (a bit of Shar Pei in the mix) of about 10 years, in the care of Rescue Remedies. He’s currently in foster care in Wiltshire but will soon be in boarding kennels near Gatwick on the Surrey/West Sussex border, unless the right kind of home can be found for him before then. He’s a sensitive boy who just wants a simple life.

His foster home has a resident female dog who he gets on with very well. He can be reactive to unknown dogs though. He has a protective nature and this really shows when he’s nervous. He needs an owner who projects such calm reassurance that Buskybear feels safe and doesn’t feel the need to ward off potential baddies. Being patient, letting him adjust to things in his own time, taking advice from experts and being willing to adjust their own behaviour to help Buskybear relax are all traits that his forever human must have. His love is well worth investing in this bit of effort. 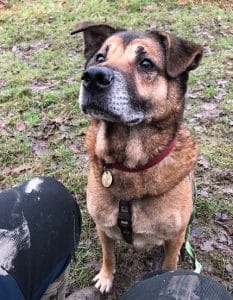 Buskybear is extremely bright and eager to please. He was in kennels previously and was loved by all volunteer walkers who met him and had cuddles with him. He did very well in a former foster home where his carer called him the perfect house guest. 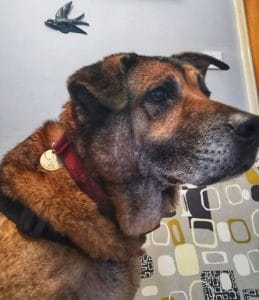 She said, “He can pull when first getting going due to his excitement or when a he’s caught an interesting smell he wants to investigate but it’s definitely manageable and doesn’t last long at all. When out on walks he responds well to “wait”, “leave it” and “no” commands (these work in the house too but have rarely been needed). If his nerves trigger due to an unknown noise or person nearby, he’s easy to move on by telling him “it’s okay” and to “keep going”. 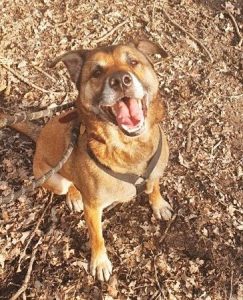 “He also enjoys spending time outside in general so will happily just hang out in the garden with his person/people. He’s not a dog that just wants to sleep all day, he wants attention from his human with pets and cuddles or on occasion playing a short game of fetch with a tennis ball. His favourites are gentle head scratches and chest massages. 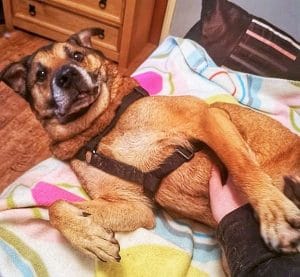 “He’s a very smart dog who already knows sit, paw (and “next” for the other paw) and is eager to learn in general. He’s also done some “sit and stay”. He’s very gentle taking treats. He’s completely housetrained and is very good at telling you when he needs to be let out.” 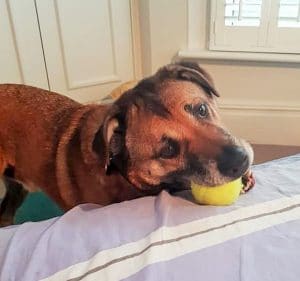 Sadly, he hasn’t settled in his current foster home and his worries seem to have increased which is why he needs to move on. He finds unknown men alarming and don’t even get him started on dogs who look at him funny or cyclists. Despite the many things he has to protect himself from, his basic nature is all about love. 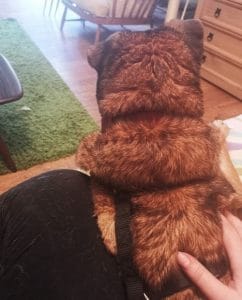 His reactions can be worked on and it’s likely a behaviourist could help. One trick his former fosterer found helpful was to give any visitors to the house a big welcome so that Buskybear knew they were friendly and that his home and carer were safe. Having to be on guard is exhausting! 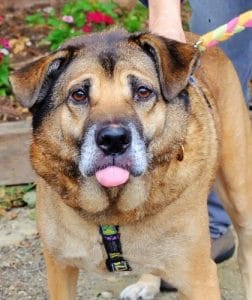 Please say you saw Buskybear on the Oldies Club website. 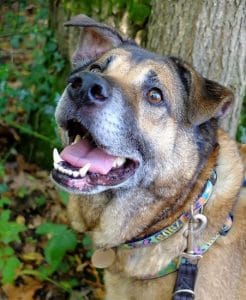