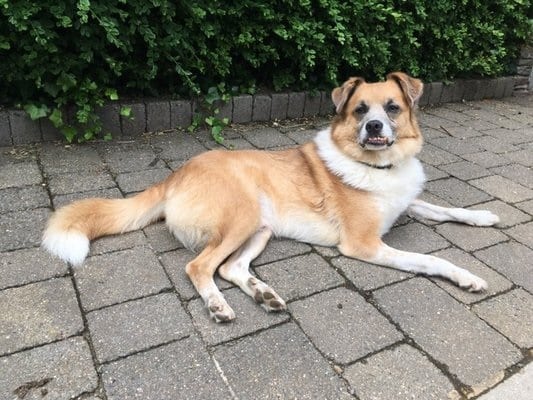 Harry is about 10 years old and is being rehomed by SOS Romanian Rescue South West. He is in a foster home near Tiverton in Devon. He can be rehomed anywhere but you must be prepared to travel to Devon. 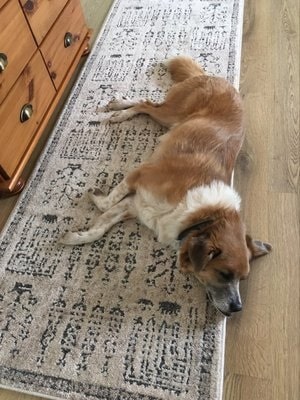 Harry is a medium-sized boy weighing about 15kg. He came to the UK from Romania and was in a home for nearly 2 years, but sadly his adopter was no longer able to keep him due to a change in circumstances.

According to his passport, Harry is almost 12 years old, but he’s thought to be a bit younger than that. His age when in Romania was probably over-estimated due to the poor conditions in which he had been living.

He belonged to an old lady who had kept him on a two-foot-long chain outside for his entire life and so his legs were not able to develop correctly. They are still a little ‘wonky’, but he is very active and they don’t hold him back at all. He loves zoomies! 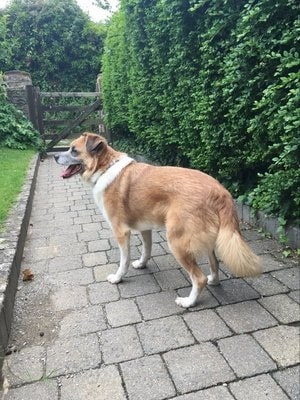 Harry has a sensitive stomach so must be fed on a strict, raw-food diet. If you aren’t happy to do this, Harry isn’t the dog for you. He has a slight heart murmur but doesn’t need any medication. He is neutered. He would benefit from a confident owner who can help him continue to overcome his reactivity to other dogs. As you can see from the video below, he is improving and learning to play in his foster home, but this work needs to be continued.

Like many Romanian dogs, Harry is not keen on having his claws cut, but he loves being brushed and enjoys tummy tickles once he gets to know you (slow introductions work best). Harry is calm in the home and does not chew so can be left for short periods if necessary. He barks a bit to start with when left but then settles. He is very loyal and will be devoted to his new adopter. Harry wants a home with people who have lots of love to offer him, to make up for lost time. 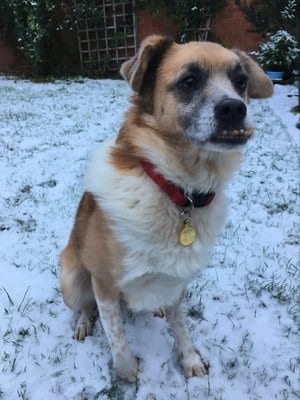 Harry needs to be an only dog in the home. He doesn’t like male dogs and takes time to get to know female dogs. He has a high prey drive so cannot be rehomed with cats. He doesn’t like young children. He loves people and would love a home with a nice garden that he could potter around in. He likes going out in the car but needs to be lifted in.

A homecheck will be needed. As the right home for Harry is more important than an adoption fee, his adoption will be by donation.

Please mention that you saw Harry on the Oldies Club website.
————–