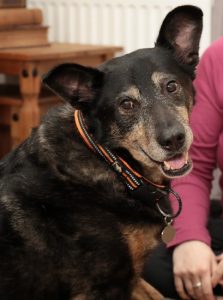 Darling Danny is a medium to large (22kg) Crossbreed boy, believed to be 8-10 years old. He’s in a foster home in Liskeard, Cornwall where he’s known as Danny Bear because he loves cuddles and looks a bit like a bear! His retirement home needs to be in the South West or South Wales. 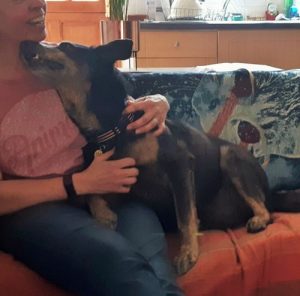 Danny is a well travelled dog. He was found in a pound in Bucharest and then spent nearly 2 years in a private shelter in Romania. He’s loving the home comforts and mild climate here! 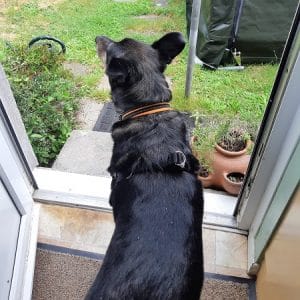 Danny is still an active, robust boy and needs plenty of exercise and a good sized garden. He can be a bit strong on the lead, simply with enthusiasm for walkies! He’s generally good with other dogs he meets. Other males can bring out his bossy side. He has lived peacefully with a female dog before and he tolerates confident cats but it’s thought he’s rather be the only pet at home. He does love being the centre of attention! 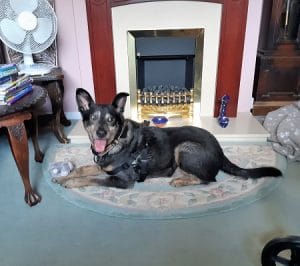 Danny wants an adult only home, although sensible teenagers might be OK. He tends to guard his toys to some extent and sometimes, he thinks your newspaper or cushion are his. Ahem! His foster carer is working on this with him and he’s never too stroppy about it, but there could be misunderstandings with youngsters. He needs his people to understand that he’s had a tough past. For instance, he will take any food from a counter that’s within reach because he used to have to do that sort of thing to survive. 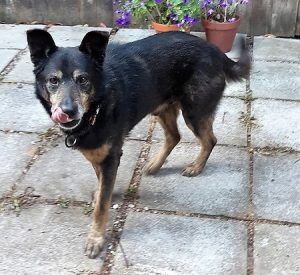 By nature, Danny is a gentle soul who’s keen to please. He’s food orientated so he’s easy to bond with and to train. All he wants out of life is walkies, regular meals and people to love, preferably with sofa cuddles. Plus treats, obviously! 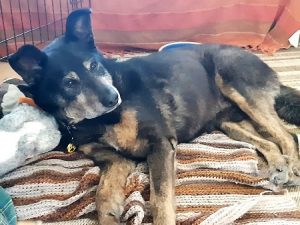 Danny’s vaccinations, flea/worm treatment are all fully up-to-date. He is microchipped and he has been neutered. His pet passport and medical records (including recent bloods) are available, and he can be visited in foster care so potential adopters can get to know him and see just how incredibly loving this sweet boy is!

Danny is being rehomed privately by his foster carer, Kezia, who has confirmed that she would take him back if his new home didn’t work out for any reason. Prospective adopters will be home-checked.
_ _ _ _ _ _ _ _ _ _

Do you room on your sofa to cuddle with Danny Bear? If so, please contact Kezia as follows:

Please say you saw Danny on the Oldies Club website.