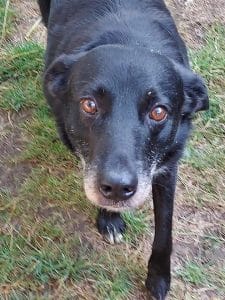 Scott is a black Lab (mostly) of around 8 years in a foster home in Hockley, Essex through Safe Rescue.

Scott was one of thirty dogs surrendered to the Botosani public shelter in Romania after their owner was widowed and forced to sell their house. All thirty were scared and unused to human touch. 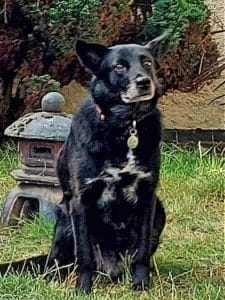 It’s been quite a long road with Scott since his arrival to the UK with his daughter Tawnie who has recently been rehomed. Initially he would let out an ear splitting and pitiful scream whenever he was approached or touched which was absolutely heart breaking. Several months down the line and his fosterer feels he is ready to go to the right home now. 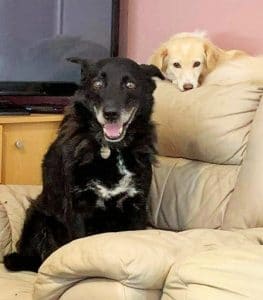 His fosterer says, “He’s still a big scaredy-cat, not out of his shell completely. He still gets up out of his bed and walks out of the room if I do anything too close to him. He is such a good boy though, no trouble at all. He is scared of rain, of wind, of noise and men and more than one person at a time makes him nervous. He hides under bushes and whines when he’s scared. 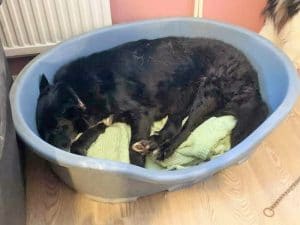 “He loves food and treats and he sleeps a lot but he’s funny… he lets you know his feelings. He enjoys his walk gets very excited to go out but he lets me know he still gets scared sometimes. He doesn’t pull on the lead at all. I think he’d like to run free but I dare not let him off lead in case he gets spooked.

“He’s a lovely old boy with a lot of life left in him. He would best suit a quiet home as he’s so gentle and still jumpy. He’s completely undemanding and tends to keep himself to himself. He needs to live with another dog and is fine with cats. He needs a bit of extra love and understanding as it’s clear he’s not had any and when he trusts you he blossoms.” 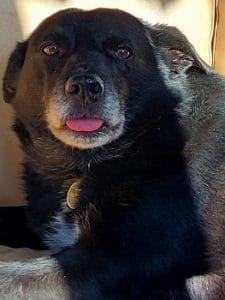 If you might be the kind human to help this sensitive soul enjoy a relaxing retirement, please contact Safe Rescue as follows:

Please say you saw Scott on the Oldies Club website.