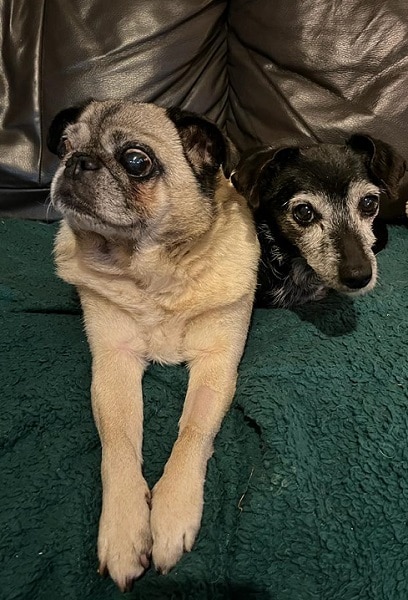 This dearly devoted duo is Ted, a 10-year-old Pug, and his partner-in-cuteness Penny, a 15-year-old Dachshund x JRT. They came into the Oldies Club rescue due to their owners’ poor health. They are in a foster home in Welling, Kent, waiting for someone to offer them a lovely new home together. 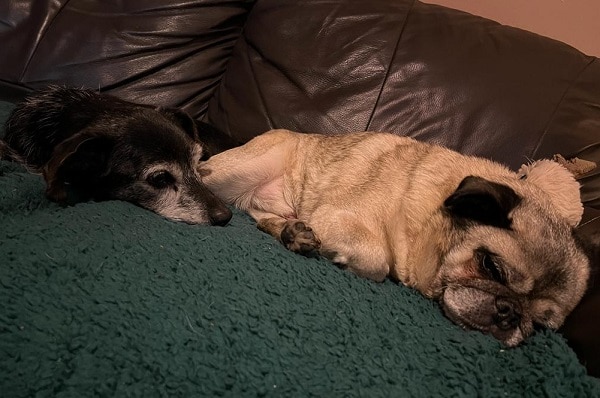 Settled gradually in foster: It took Ted about three weeks to settle in, and Penny took about four weeks.

Can be left for short periods: As long as they have each other, Ted and Penny are fine to be left for an hour or two when you need to pop out, but they really enjoy human interaction so wouldn’t suit a home with people who go out to work, or work from home in a role that isn’t flexible enough for you to interact with them. 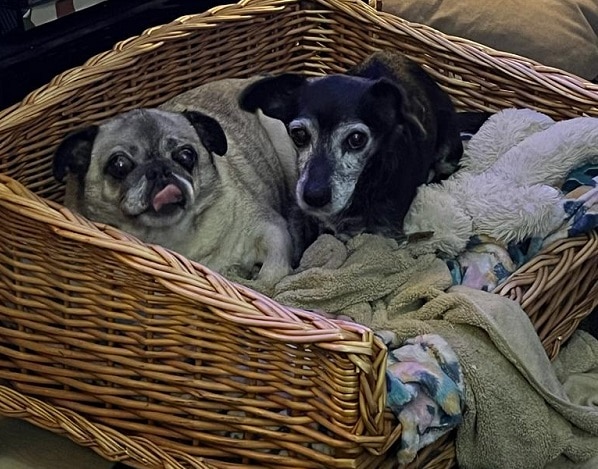 Good with calm dogs: They are both good with other dogs but Penny can be nervous if a bigger dog suddenly appears and looms over her.

Not used to cats: Ted and Penny haven’t lived with cats, and in their one meeting with a cat since coming into foster care, Ted barked at the cat, so we are looking for a cat-free home for them.

Good with children: Ted and Penny are fine with children and they used to have respectful grandchildren visit their previous home. They should be fine to live with calm, well-supervised children aged 11+ who understand that older dogs need plenty of quiet time to themselves.

Enjoy walks: Ted and Penny love going for walks, wearing harnesses. Their recall isn’t great, but when you shout their names they will stop. They currently have walks of between 20 minutes and an hour, depending on whether they are just going around the block or are having a trip to the field. 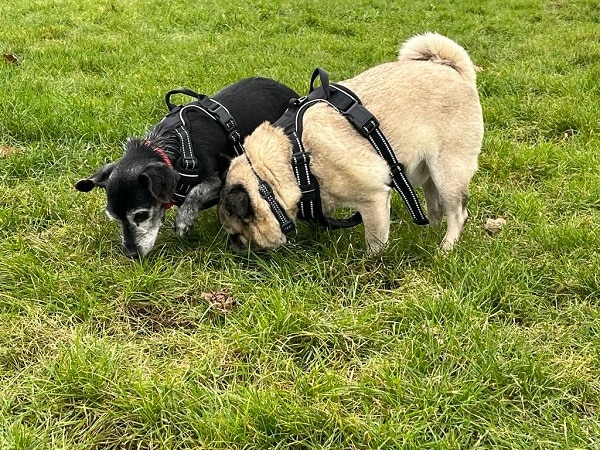 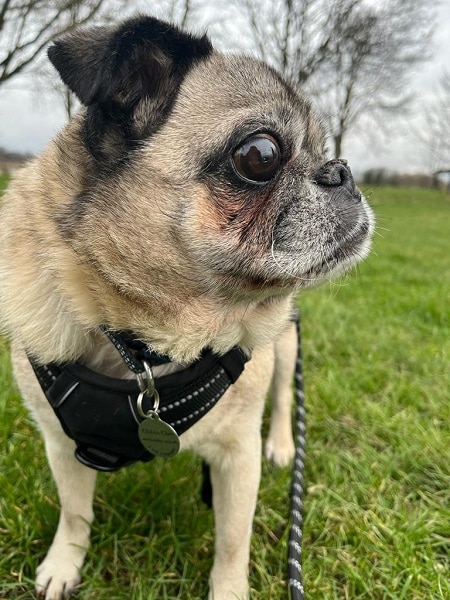 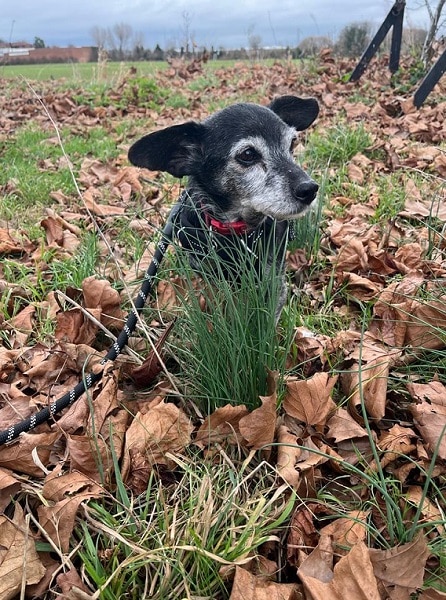 Perfect in the car: They are fabulous little travellers.

Favourite pastimes: Ted loves cuddles, being the centre of attention, and treats. Penny likes to investigate things and enjoys pottering around the garden. 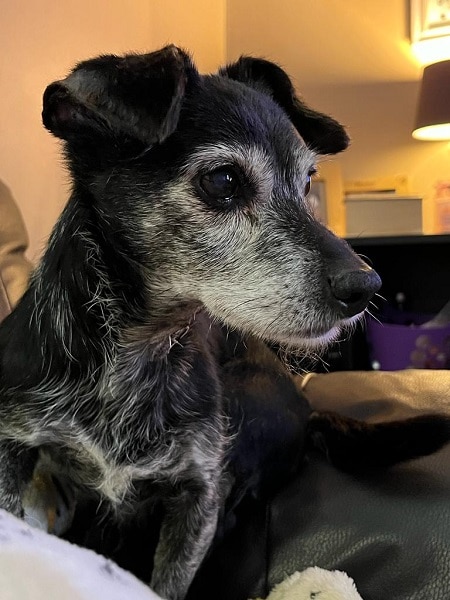 Dislikes: Ted is not keen on vets and Penny doesn’t like loud noises or people stepping over her.

Their ideal home: Ted and Penny need a home with someone around for most of the day as they love to be with people. They need a nice garden as Penny in particular enjoys being outside. They need a home without cats, where any dogs and children are older, calm ones. A home on one level, or where there is a stairgate to prevent Penny climbing up (she can’t get back down) would be safest. And it goes without saying that they must have a new home together as they are such devoted friends. 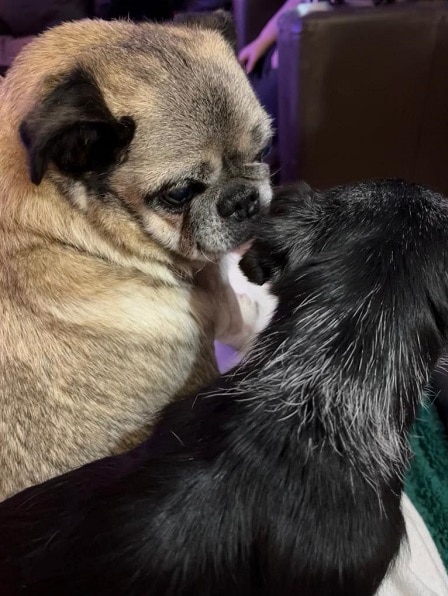 Health notes: Ted and Penny are neutered, vaccinated, microchipped and have been worm and flea treated. Since coming into foster care, Penny has had a harmless lump removed from her neck and had a dental. Ted has also had a dental and had to have lots of teeth out. 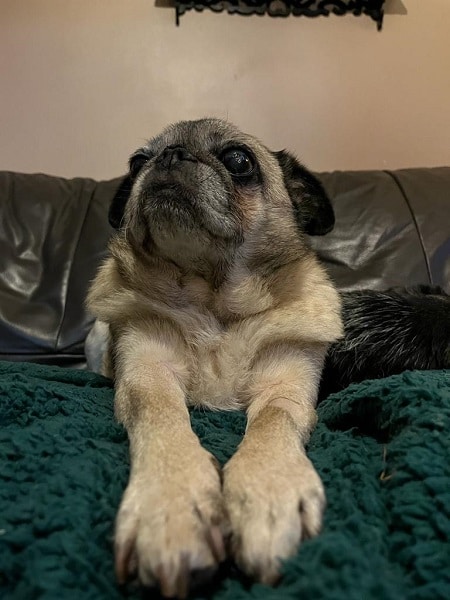 More from their foster carer: “Ted is a diva who is excitable, loving and protective. Penny is caring, timid, independent and polite. When they first arrived, Ted was very vocal but anxious which resulted in him air thrusting next to Penny, but this stopped after a week or two. Penny was very nervous and didn’t like you walking too close to her. We noticed straight away the bond they had: they are inseparable. Ted hasn’t attempted to climb the staircase but Penny will, but then she can’t get back down. Ted can jump on the couch unaided but Penny uses dog steps as she can’t quite make the jump; she has no issues using these as there are only three steps. They have shown no interest in toys and they are all about the hugs. Meal times can be fun as they always think the other one has something better. You have to watch them as sometimes Ted will step aside to let Penny eat his, and sometimes Penny does the same. They are very affectionate towards each other; they love grooming each other and Penny will mother him which he seems to like. Once they are both settled they will always want to be by your side. So with a bit of patience these two adorable dogs will be perfect companions for their new people”. 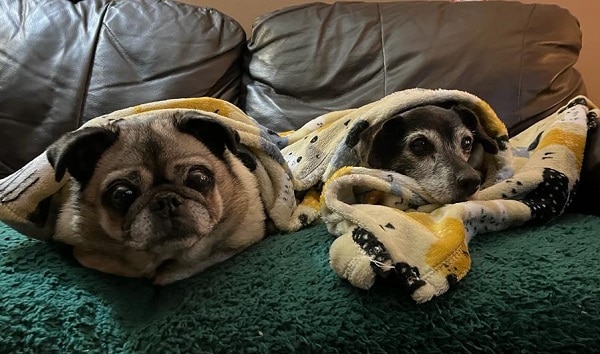 If you would like to offer Ted and Penny a permanent home together, please read our Adoption Procedures for information about the adoption process. You can then contact an Oldies Club Rehoming Co-ordinator as follows:

They can be rehomed anywhere on the UK mainland – the closer to their foster home the better – subject to a satisfactory home visit. Note that you will be required to travel to the foster home to collect them.
——————————
If you would love to offer a home to an oldie but your circumstances aren’t suitable, perhaps you would be kind enough to sponsor one of the special oldies we are caring for that, due to health problems, are unlikely to be offered a permanent home.
——————————

Tags: Calmer and Quieter, Good with other dogs, Marvellous Mongrels, Needs someone around most of the time, Pairs of dogs, Small and Cute, South East, Terrier
Oldies Club Dog